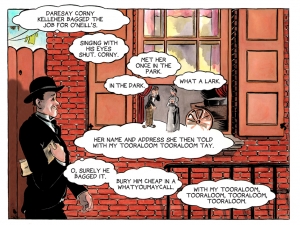 Bloom’s thoughts about the funeral he is attending later in the day wander to speculation about how the funeral job went to the undertaker O’Neill (instead of, perhaps, the undertaker he is passing by) and how Corny Kelleher, who works for O’Neill, must have made it happen.

Kelleher is one of the shadowy, peripheral figures of Ulysses – he’s not a major character, but he turns up in odd places. Bloom also associates him with a song whose words he can’t completely remember, about a couple who meet in the park “on a lark.”  It’s unclear what this song is, but songs like this never end well, with all that tooralooming.

Bloom’s speculation about Corny Kelleher shows an Odysseus-like perceptiveness in his understanding of the world around him.  A funeral is real business in Dublin of 1904 (as we’ll see in the “Hades” episode), and Corny Kelleher must have connections…

I’ve said it before, but I’ll say it again – reading Ulysses for the first time is like being dropped into a new city where you might speak the language but you don’t know anyone or anything, and there’s no gentle narrator to guide you.  Bloom is thinking to himself, mostly about people and songs and things you, reader, don’t even know yet.  This is just one of the things that make it a challenging read – like catching up on an overheard conversation between strangers.