If you’re feeling a little lost here, there’s good reason.  Stephen has been trying to teach his class about an episode in Roman history, and they aren’t paying attention.  His class is filled with boys, but he thinks of a bunch of girls names (Edith, Ethel, Gerty, Lily…).

The student Armstrong somehow thinks that the lesson is about a pier, not a Pyrrhus, and mentions Kingstown Pier as an example.  It happens that Kingstown Pier (now known as Dun Laoghaire) is not very far from the school, and it’s even closer to the tower where Stephen’s day began. 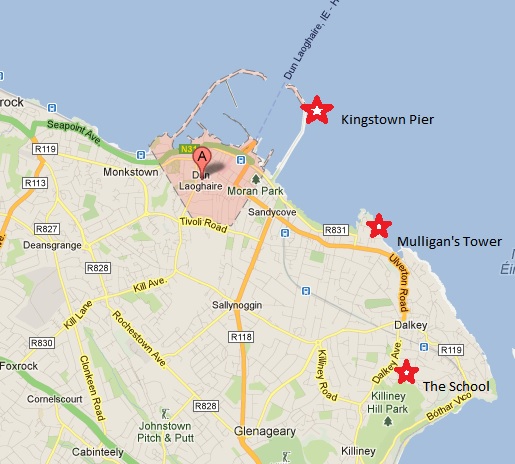 Kingstown Pier was, and still is, a popular place to walk. You might go down there to meet your girlfriend or your boyfriend, if you’re young and have nowhere else to go.  This is the association Stephen makes – the “mirthless but with meaning” laugh of the earlier page implies they know what Kingstown Pier means, if you know what I mean.  The association may be stronger in Stephen’s mind, because Mulligan, in the last chapter, mentioned a friend who had been “spooning” with a girl on the pier, possibly even getting her pregnant.

Of course, it’s also where most passenger ships coming and going from Dublin dock, then and now, and the idea of the Kingstown Pier as a “disappointed bridge,” unable to go all the way across the Irish Sea, has some resonance for him as well.  In Joyce’s time, talented young men left Dublin via Kingstown to find better lives for themselves in England and beyond.  This is the meaning that Stephen thinks will be amusing to Haines, possibly worth something for his book.

The very act of passing this on to Haines, though, reminds him of how even his Anglo-Irish students are jaded by their role as servants to the English master.  Rob takes us back to the end of the Telemachus episode, where Haines lights a cigarette for Stephen as he thinks about the different masters he serves – the Catholic church, the British throne, and the “third who wants me for odd jobs” – arguably Ireland itself.