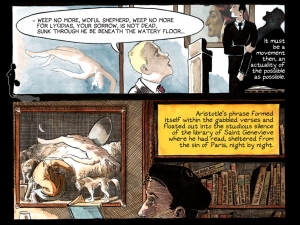 While his student recites from John Milton’s “Lycidas,” Stephen’s thoughts are wandering back to Aristotle, and his memories of reading in the library of St. Genevieve in Paris.

There are a lot of places to go here – but let’s think about “possibilities” for a moment.  Stephen is thinking about them in an Aristotelian context, but there’s also the lost possibilities of the drowned Edward King, memorialized in the Milton poem. There are the possibilities unrealized in the boys who are sitting in front of him – how does he, as their teacher, help to shape those possibilities (remembering that Aristotle was also a tutor to Alexander the Great).  And then there are Stephen’s own dampened possibilities. He came home to be at his dying mother’s bedside – what if he had stayed in Paris? You can see in Stephen’s dress, his manner, and his thoughts here, a sense of him clinging to his identity as a Parisian bohemian and poet.

You may be wondering about the painting that Stephen is looking at.  The figure of the drowning Lycidas, or Edward King, becomes an image of a somewhat-fictitious Celtic hero.  Here’s what Rob has to say about it:

Painting is by Nicolai Abildgaard as in entitled “Ossian; The Ghost of Culmin Appearing to his Mother” (c. 1794).

The Ossian tales were a very popular crock of poetical shit handed out by James Macpherson and disputed for their authenticity for quite some time; certainly a funny reference to Stephen’s earlier portrayal of the current position of Irish author as a “jester in the court of his master, indulged and disesteemed.”

But theres another Joycean reference here in the image. Celtic hero Culmin was slain in battle and his mother seems to know of it through the mournful baying of their household dogs. Certainly fodder for the Paris scene here, a bit idyllic in Stephen’s mindseye, and how it is interrupted by the message of the impending death of his own mother. But we also get visual material to link with the dog references we’ll be seeing in the “Proteus” chapter and Joyce’s fear of dogs. And, as you’ll see throughout this chapter, the dreamy romanticism involved in death by drowning.

I first encountered this painting in the Jean Clay book on ROMANTICISM easily 20 years ago and have been infatuated with it ever since using the figures in various Captain America drawings from the old days (like below).

But this is a really good example to me of how everything comes together when the art-making draws from so many possible sources from our own live and the things we learn in it. A good Joycean lesson if there ever was one.

Rob may be a little harsh on McPherson, but the broader point is about myth-making, Milton’s myth-making about his drowned friend, and maybe even Joyce’s myth-making about himself in the form of his alter-ego, Stephen Dedalus. Do we make similar claims on Joyce’s Dublin as we do on MacPherson’s Celtic myths? And how do we square the myth-making with the need to heal the pain of lost possibilities?