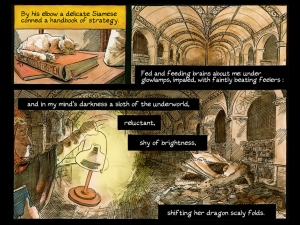 Stephen’s mind is wandering as he teaches his class. Specifically, it has wandered back to the Bibliotheque Sainte Genevieve in Paris, where he must have spent some time studying.

On one level, what Joyce is doing here is simply showing us why Stephen is not really cut out to be a teacher, as he also shows us how his mind works and where his interests really are.  His heart is in the library, fighting his internal demons though his art.

Two other connections may be helpful here.  It’s been fairly well established that the first chapters of Ulysses, the ones with Stephen, were thought of as a sequel to Joyce’s earlier novel Portrait of the Artist as a Young Man. If you’ve read that, you know that it ends with the young(er) Stephen Dedalus resolving to leave his native Dublin and to “forge in the smithy of his soul the uncreated conscience of his race.”  We learn here, and in other places in Ulysses, that Stephen went to Paris to become a writer, but he was summoned back to be with his mother on her deathbed.  He tried to escape the city, but it has pulled him back in…

The other connection is, of course, to Joyce himself. Joyce also left Dublin after he graduated college to go to Paris.  Ostensibly, he went to study medicine, but the short time he was there was spent reading and drinking and being a bohemian. And then he was summoned home to be with his dying mother.

The “dragon scaly folds” that Stephen struggles with in the library always make me think of Milton’s description of Sin in Paradise Lost-  or at least William Blake’s illustration of her – here shown with father/lover Satan and their spawn, Death: 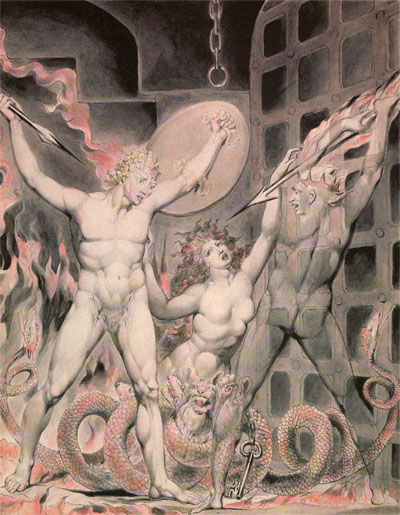 By the way, I had  always thought the ‘delicate Siamese’ was a person from Siam, studying in the library. I like Rob’s cat better.