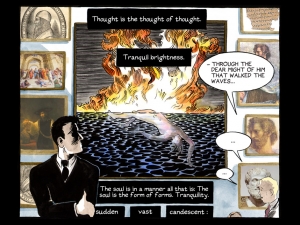 Talbot, the student, is pretending to recite Milton’s “Lycidas” from memory, and Stephen is pretending to listen.  Talbot has a problem, though – he’s reached the end of the page, and can’t go forward.   Meanwhile, Stephen is still figuring out Aristotle.

I’m particularly fond of the reference to Rembrandt’s “Aristotle Contemplating the Bust of Homer”, which you find right behind Stephen’s head here.  Interpreters of the painting have wanted to read into it a statement about Aristotle and his relative worldliness,(exemplified by  the gold chain he wears – a gift from Alexander the Great), showing deference to Homer, the blind, poor poet. The interpretation suggests a view that there are the things a person needs to succeed – grounded in an Aristotelian insistence on empirical evidence, things as they are – and then there are the arts, culture, stories, that shape the broader world.  You can be an artist or a businessman in this world. I think we know where Stephen Dedalus would find himself here… and also, remember that this whole novel is also a tribute to Homer, a tribute to his permanence and his influence.

So let’s touch base with Homer for a second.  We are well into an episode called “Nestor,” in which Stephen Dedalus plays the role of the son of Odysseus, who goes to visit some of his father’s war buddies to find out what happened to him.  He goes to learn history, in other words, but what he learns only makes his need to change his life and lay claim to his home only more real.  Stephen is struggling with history, with Aristotle, with keeping a job – and the place his mind wants to go, it seems, is creating images and playing with words.  His ability to recall Aristotle’s philosophy doesn’t really get him farther than this.