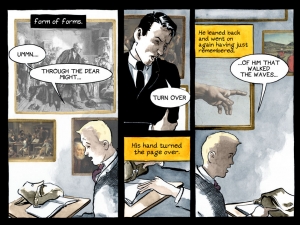 Talbot has been pretending to recite from memory, but Stephen is on to him. Instead of calling the student out, he just tells him to “turn over” and keep reading from the book.  That’s why Stephen as narrator dryly says he started “again having just remembered.”

What does it mean that Stephen is a bad teacher?  Is he such a bad teacher, after all?  We’re about to find out what the headmaster of the school thinks, but the pictures around Stephen are meant to convey a little of the environment of an unruly classroom.

Stephen doesn’t want to embarrass his students.  He’s not tuned in to what he’s teaching, but he is tuned in to who the kids are, where they live, what kinds of lives they lead.  Readers of Portrait can probably understand why Stephen’s like that.  Some of the most memorable passages in that earlier novel involve Stephen’s mistreatment at a boarding school – both from fellow classmates and from the priests who ran the place.

If you haven’t read Portrait, here is a handy claymation version:

Stephen is extremely averse to any form of authority, and is especially averse to exercising it himself.  He sees his role as a teacher as being largely a benign, if ineffectual voice.  His rebellion, his assertion of his will, comes not through the way he acts on others but will come through his art. At least that’s the plan.